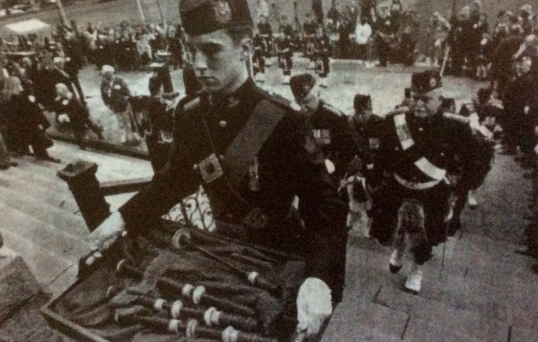 In wartime : military pipers were killed in great numbers. James Richardson aged 19yrs born in Bellshill, Scotland. Served as a private and piper with the 16th Infantry Battalion (Canadian Scottish) during Battle of the Somme 1916.

He accompanied the troops playing them over the top. After the first critical advance with the company commander killed and mounting casualties Richardson played again. On this occasion his coolness and playing inspired the troops to move forward, overcoming obstacles and capturing the enemy position.

He was ordered to take back a wounded comrade and some prisoners. After this he returned to retrieve his bagpipes. On this occasion he came under enemy fire and was shot and killed. For his action he was posthumously awarded the Victoria Cross.

James Richardson’s bagpipes were found on the field by a military chaplain and ended up at Ardvreck School in Crieff, Scotland. This broken, mud-caked and bloodstained instrument lay unidentified for many years until authenticated and later repatriated to British Columbia in 2006.  Blue Badge Tourist Guide Mike at Piping Scot Tours is also a bagpiper immersed in the history and culture of Scotland, To find out more follow the link.  About Mike